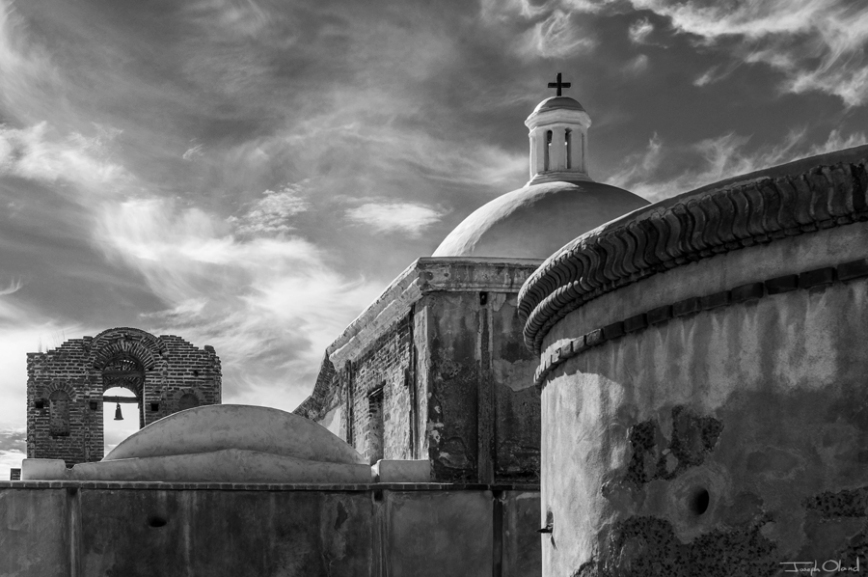 “You must not lose faith in humanity. Humanity is an ocean; if a few drops of the ocean are dirty, the ocean does not become dirty.”
~Mahatma Gandhi

Tumacacori is the site of Mission San José de Tumacácori, an 18th Century Franciscan mission. It takes its name from an earlier mission site founded by Father Eusebio Kino in 1691, which is on the east side of the Santa Cruz River south of the national park. This particular mission was founded at an extant native O’odham settlement and represents the first mission in southern Arizona.

The later Franciscan mission, now in ruins, was never rebuilt once it was abandoned after repeated Apache raids in the 19th century. Nearby Tubac was besieged in 1861.

“The only wealth which you will keep forever is the wealth you have given away.”

This is my meditation spot, and this is certainly not the only photograph I’ve made of it. Up on the hill overlooking the San Xavier Mission outside of Tucson is a shrine to the Guadalupe Virgin and a large white cross. You can hear the faint whisper of the highway off in the distance, and you can see a cluster of Downtown Tucson buildings on the horizon.

“Apply yourself both now and in the next life. Without effort, you cannot be prosperous. Though the land be good, You cannot have an abundant crop without cultivation.”

February over here at LenseBender Design is going to be the month of film. Every single day I’ll be contributing a new film-based photograph made exclusively with one of my vintage film cameras. I have an extensive collection of old cameras – and even some vintage film stock – so this should be a pretty fun ride.

The first photograph of the month was made using a little-known camera known as the Fujica Half. For more information on this nifty little hand-held miracle machine, you can read about it here.

The San Pedro Chapel (pictured above) is located in the historic Fort Lowell neighborhood near the Rillito River north of Tucson. The neighborhood is named after the military outpost that once stood nearby. Fort Lowell was an Army outpost active from 1873 to 1891 and was intentionally placed on the outskirts of Tucson at the confluence of the Tanque Verde and Pantano Creeks. Year-round water at the mouth of the Rillito River made this area prime real-estate for a camp.

Once the fort was decommissioned, the Department of the Interior put the fort’s lumber, windows, doors, and other salvageable items up for sale; the fort was quickly dismantled and hauled off. The old adobe structures were already disintegrating back into the desert by the turn of the Twentieth Century, when immigrant families from Sonora, Mexico began to settle into the territory.

The migrants occupied the remaining fort structures and replaced the missing windows, roofs, and doors. The enclave eventually became known as El Fuerte. The community mainly raised livestock and sold lumber to residents in the town of Tucson.

The community developed strong roots. They built new houses in the Sonora Ranch style, dug wells (finding water at less than thirty feet), built a school house, and established a cemetery and built a church. The first church on this site was just large enough for the Carmelite Fathers to stand in while serving mass; the congregation would gather under the mesquite trees outside.

A more permanent structure was built in either 1915 or 1917 (the records are not clear on this), but was destroyed by a tornado in 1929. The San Pedro Chapel that survives today was built directly over the ruins of the previous chapel in the Mission Revival Style and dedicated in 1932.

In the 1940s, as Tucson was growing, the Church and general store of the El Fuerte community made this area a de facto town center. Mexicans living in the east of the territory would travel to El Fuerte to attend mass & school as well as  enjoy family parties, baptisms, and other social events. The Chapel is still in use today, as it was then, for baptisms and weddings. At its height, the community was only about three-hundred people, and this building is one of the few reminders of what once existed here.

And I just happened to stumble across San Pedro Chapel on a bike ride.
Pretty darn neat.