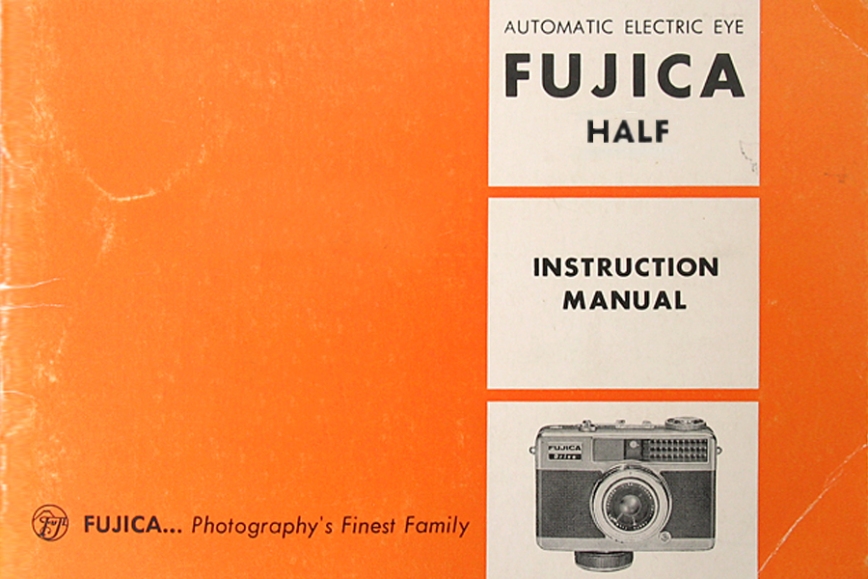 Originally marketed as a “true candid camera,” the Fujica half was a wonderful new addition to the world of casual “economy photography” in 1963. Using standard 35mm film, this camera split the 35mm frame size in half, allowing for two vertical exposures for every single frame – hence the name “half.” Seventy-two exposures were now possible from a thirty-six exposure roll of film. Pretty snazzy.

The Fujica Half was likely developed to compete with the Olympus PEN half-frame camera, which had experienced a great deal of success. Boasting crisp pictures from a wide-angle (28mm) five-element lens, the Fujica Half could also open up to a 2.8 f/stop, making it unusually versatile. Wide angle, low-light friendly, sharp fixed-focus, extended frame count, and all in a compact design small enough to fit in your pocket.

Designed for a point-and-shoot audience, the built-in selenium light meter and compact design made the Fujica an ideal machine. It was one of the most accessible, user-friendly camera models designed until this time, delivering the practice of photography into the hands of an unprecedented number of consumers.

As film prices dropped throughout the latter 60’s, “whole-frame” cameras supplanted the half-frame models. By the end of the decade, major manufacturers abandoned the half-frame model altogether. It was a short-lived fad, but these metal-constructed beauties were built to last. For any camera enthusiast, it’s easy to find a functioning model for a cheap price. They’re a lot of fun to shoot with.

One thought on “The Fujica Half”