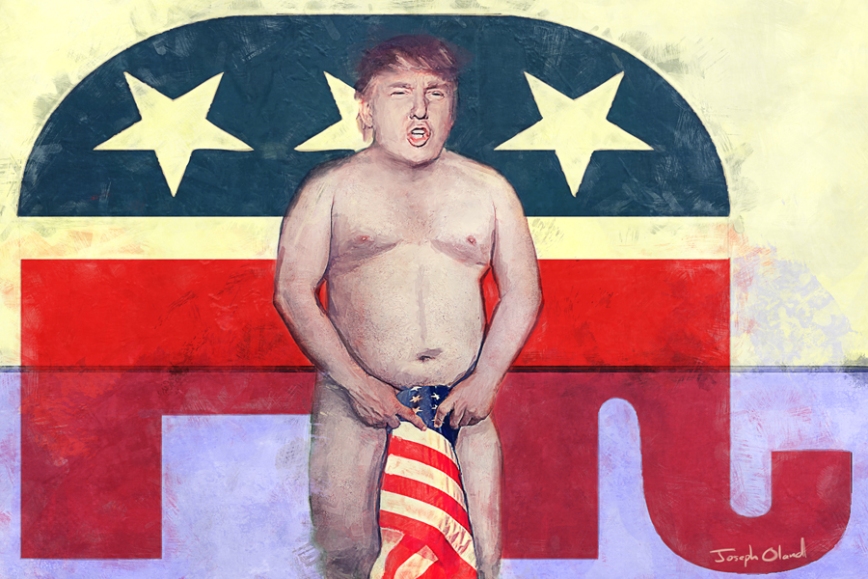 Saturday brought more of the same from GOP front-runner Donald Trump, who was campaigning in Iowa. With the caucuses less than two weeks away, one would expect his words to be strong, calculated, and to the point. In a not surprising move, however, Trump shot from the hip, remarking at one point that his supporters wouldn’t abandon him even if he killed somebody.

“I could stand in the middle of 5th Avenue and shoot somebody and I wouldn’t lose voters,” he said at the campaign rally.

This brand of brash confidence has been a trademark of the Trump campaign, who has launched vicious personal assaults against his competitors, journalists, and even entire ethnic groups. In a world of reason, these kinds of remarks would be identified by what they actually are: denigrating, unprofessional, and even dangerous.

A clear line, as an example, cannot be drawn between pulpit-pounding (in the name of ending federal funding for Planned Parenthood) and the shooting that occurred on November 27th, but it would be a mistake not to entertain the possibility that staunch political rhetoric may have played a role in hardening the attacker against his victims. This should be an object lesson; when politicians speak passionately, about any issue, there are a lot of people listening, and not all of them will respond with consideration and restraint.

With shootings in Colorado Springs, San Bernardino, the Northern Arizona University campus, and elsewhere during this election cycle, one of the major talking points has revolved around firearms legislation, culminating in President Obama’s executive order on January 5th. With a great deal of opposition from the GOP, it is still in poor taste for a Republican presidential candidate to invoke an image of gun violence to illustrate how politically impervious he believes himself to be.
At it’s best, Trump’s statement in Sioux Center has a callous ring to it. What does it say about the Republican electorate if Donald Trump’s statement is true? Are they that forgiving? How can a political figure ascend to an “above the law” position that allows murder? What does it say that Trump’s supporters aren’t offended by his comment?

Since the presidential race began, commentators on the political left have disregarded Trump as a non-threat, a narcissistic media whore who would eventually prove ineffectual and irrelevant. It’s been stated, on too many occasions, that it’s only a matter of time before he says something so outlandish that his supporters will turn on him. That time has not come, and it might be wise to put that notion to bed.

Donald Trump has racked-up a number of media gaffs that have proved not to be gaffs – his supporters seem to love him all-the-more for his aggressive cruelty toward anyone or anything that might oppose him. He rebounds when making offensive statements about Mexicans, when he insults the looks of his party competitors, when he mimics and pokes fun at the physically disabled. And his attitude toward banning Muslims isn’t just a slight against an entire population – it runs contrary to the spirit of the United States of America itself.

We should not forget about the neoclassical statue that sits in New York Harbor. A symbol of American values, it is a depiction of the Roman goddess Libertas. In her left hand is an engraved tablet with words from “The New Colossus” penned by American poet Emma Lazarus.

“Give me your tired, your poor,
Your huddled masses yearning to breathe free,
The wretched refuse of your teeming shore.
Send these, the homeless, tempest-tost to me,
I lift my lamp beside the golden door!”

Building walls and closing doors does not a great nation make. Joking about killing people isn’t anything we should tolerate from our political leaders. Donald Trump is not irrelevant, and the other shoe isn’t about to drop. He has money and he has support, and it’s time we all start paying closer attention.

Five years ago violence was visited upon Tucson when a gunman opened fire at a grocery store parking lot. Nineteen individuals were shot, including United States Representative Gabrielle Giffords. Six people lost their lives. I expect that this anniversary will be marked by many in the media, especially after President Obama’s executive order earlier this week. Gun control legislation continues to be a huge point of contention among American voters, but gun violence continues to be an undeniable problem. This isn’t the forum for an individual like myself to hammer out a screed about the issue. All I know is that I was in Tucson that day and I remember how it felt.

I had only just heard the news when my phone rang. A gentleman from SIPA Press introduced himself. He had received my name from a journalist friend of mine, who had explained I’d likely be available to cover the story. This would be the first time I was ever hired to work as a photographic journalist. With shaky hands and shallow breath, I packed up my gear and headed down to the University Medical Center where the wounded, including Representative Giffords, were being treated. I wasn’t sure how I was going to do this job, and I certainly didn’t know what to expect. But I knew I had to go and try my best to do a decent and respectful job.

The next several days were a blur of people in mourning, of funerals and press conferences, of being pressured to go to Jared Loughner’s home and try and get pictures. Any time when I began to feel like a paparazzo, I put my camera down. There were some things I wouldn’t do. Cristina Green – the nine-year-old girl who lost her life in the shooting – was particularly challenging. The media predictably poured in like ghouls for the funeral, sticking microphones into crying faces and asking people “how do you feel, sitting out here” while they choked and sobbed their responses. I was thankful, in that moment, to be a photographer; I was able to do my job from a distance rather than invade people’s space in a moment of sadness.

There is a lot more I could say – about violent political rhetoric, about the second amendment, about the moments years later when I got to sit down with Mark Kelly and Gabby for a brief cup of coffee – but again, I don’t really think this is the place. Gabby has made more of a recovery than any of us could have ever hoped or expected. Jared Loughner, the wild-eyed gunman, is serving seven consecutive life sentences. The world is still here, even if it has been deprived of a not-so-insignificant portion of peace and happiness.