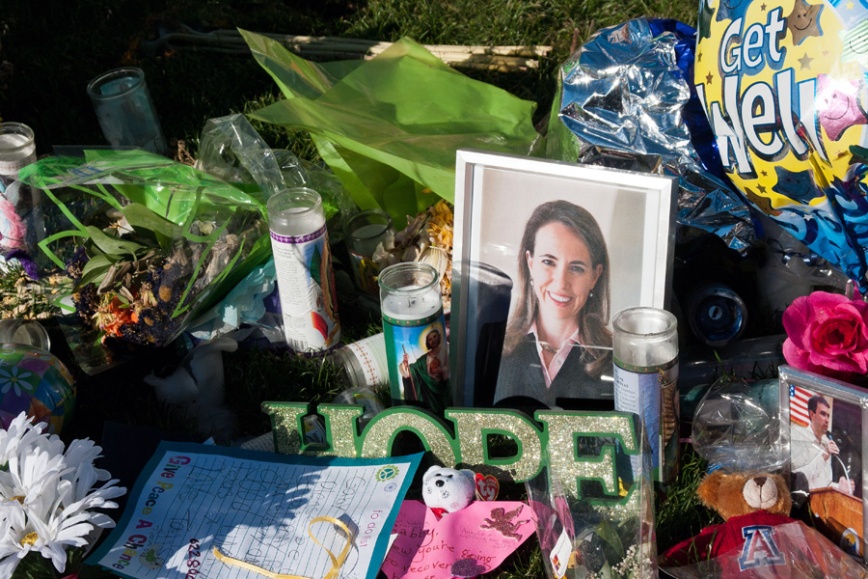 Five years ago violence was visited upon Tucson when a gunman opened fire at a grocery store parking lot. Nineteen individuals were shot, including United States Representative Gabrielle Giffords. Six people lost their lives. I expect that this anniversary will be marked by many in the media, especially after President Obama’s executive order earlier this week. Gun control legislation continues to be a huge point of contention among American voters, but gun violence continues to be an undeniable problem. This isn’t the forum for an individual like myself to hammer out a screed about the issue. All I know is that I was in Tucson that day and I remember how it felt.

I had only just heard the news when my phone rang. A gentleman from SIPA Press introduced himself. He had received my name from a journalist friend of mine, who had explained I’d likely be available to cover the story. This would be the first time I was ever hired to work as a photographic journalist. With shaky hands and shallow breath, I packed up my gear and headed down to the University Medical Center where the wounded, including Representative Giffords, were being treated. I wasn’t sure how I was going to do this job, and I certainly didn’t know what to expect. But I knew I had to go and try my best to do a decent and respectful job.

The next several days were a blur of people in mourning, of funerals and press conferences, of being pressured to go to Jared Loughner’s home and try and get pictures. Any time when I began to feel like a paparazzo, I put my camera down. There were some things I wouldn’t do. Cristina Green – the nine-year-old girl who lost her life in the shooting – was particularly challenging. The media predictably poured in like ghouls for the funeral, sticking microphones into crying faces and asking people “how do you feel, sitting out here” while they choked and sobbed their responses. I was thankful, in that moment, to be a photographer; I was able to do my job from a distance rather than invade people’s space in a moment of sadness.

There is a lot more I could say – about violent political rhetoric, about the second amendment, about the moments years later when I got to sit down with Mark Kelly and Gabby for a brief cup of coffee – but again, I don’t really think this is the place. Gabby has made more of a recovery than any of us could have ever hoped or expected. Jared Loughner, the wild-eyed gunman, is serving seven consecutive life sentences. The world is still here, even if it has been deprived of a not-so-insignificant portion of peace and happiness.