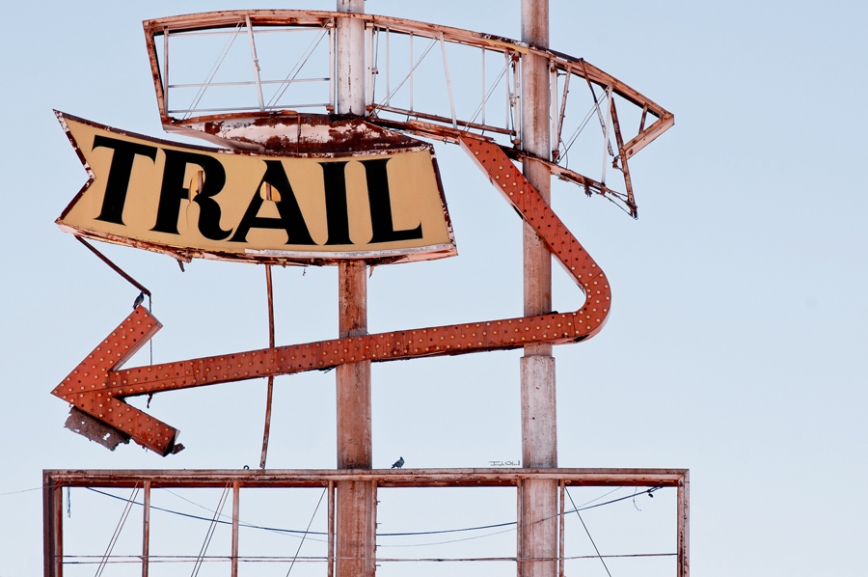 The Spanish Trail was a famous hotel during the 1960’s and 1970’s in Tucson, Arizona. Live comedy and music shows drew an eclectic crowd. The professional staff lived on-sight in duplexes north of the main hotel and resort (an area that is currently a steel yard). In fact, most of the northern end of the resort is completely gone. There used to be a golf course, lagoon, running track, and cactus garden.

This was quite the place to see – in its day. I certainly never got to see it with my own eyes.

The Spanish trail is where movie stars often lived – and some visited – while working at Old Tucson Studios. John Wayne and Michael Landon were regulars. The large area that still survives, a space-aged-looking concrete rotunda, was the dinner show lounge. Little else of the complex remains.

In fact, the word ‘Trail’ depicted in today’s photograph is gone, too. The whole tower is just a giant frame now. It isn’t likely many people are going to ever know, or remember, the kind of glamour and grandeur that once existed on this site.

SEE YESTERDAY’S IMAGE HERE
– – –
SIGN UP FOR THE LENSEBENDER NEWSLETTER