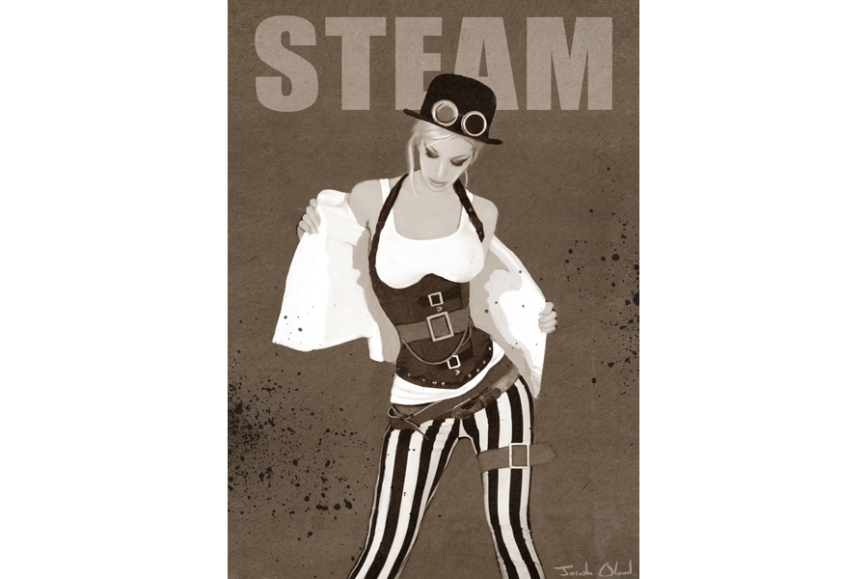 Right up front, I have to admit that this poster-style illustration is based on a photograph. I made a lot of choices while constructing this graphic but, I don’t know, I think it’s always important to be honest when sourcing other material. In cases where I’m doing fan art, it’s obvious that I’m sourcing from various popular culture properties, but it isn’t obvious when it comes to pieces like this.

I’ve never been into cosplay or SCA (society for creative anachronism), but I brush shoulders with countless creatives who participate in these activities. I’ve only been to a couple of comic book conferences, and I spend more time in front of the computer than I ever could spend trying to problem-solve my way through an elaborate fan costume. Rather than create a costume, I derive a lot of inspiration and develop ideas by knowing these people, listening to their ideas, and witnessing their marvelous creations.

That being said, the steam punk aesthetic has been popular for maybe about ten years now, but it wasn’t until the past few years that it has become recognized in a more mainstream way. Steam punk has been around for decades, tracing it’s origin back to the science fiction sub-genre ‘cyberpunk,’ usually attributed to the stories penned by William Gibson; Neuromancer should be required reading for anybody who feigns interest in cyberpunk and steam punk.

Aesthetically, steam punk designs are generally influenced by the style of the 19th-century scientific romances of Jules Verne, H.G. Wells, and Mary Shelley. It incorporates the technology and designs of 19th-century industrial steam powered machinery (hence the name), often implementing clocks, gears, modified 19th century dresses, suits, and hats, and other such paraphernalia.

I had a lot of fun tinkering with this illustration, and I certainly hope you enjoy it.