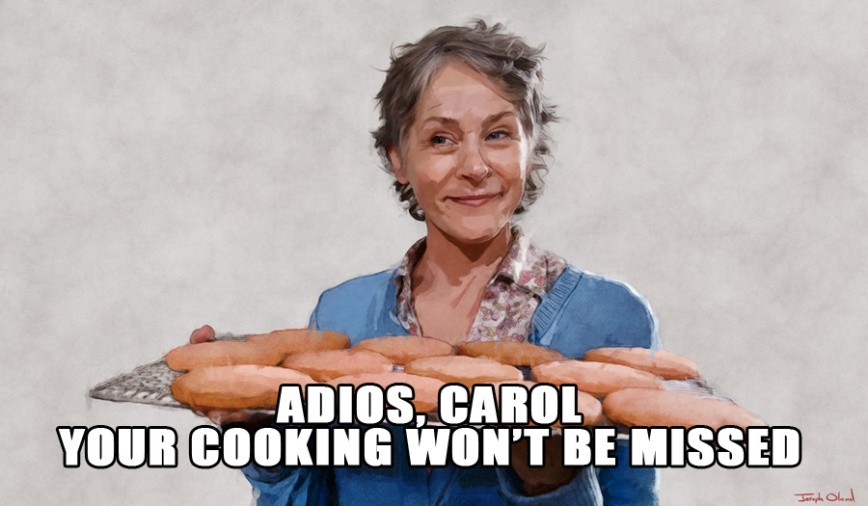 Well, somehow the lion-hearted warrior woman we’ve come to know and love has left us. Only a few episodes earlier, she was the one to strike fear into the hearts of children, travel incognito through a swarm of Wolves with a bloody ‘w’ on her forehead, and even come to blows with Morgan over his peacenik philosophy.

Carol is an enigmatic character, a wonderful dramatic foil to Daryl. In many ways, the two of them were abused, tamped-down by their life’s circumstance. Daryl was abused by absentee parents and a bully older brother, Carol by a husband’s fist. The characters have evolved organically, and are unique to “The Walking Dead” television series. Neither character exists in the comic book, so there’s no source material they need to adhere to. I think this is one of the reasons why they stand out, and why there’s been such a pronounced outcry from fans that the two develop a romantic arc. But those aren’t who these characters really are. They are more open and vulnerable with one another than anybody else in the community, and their intimacy doesn’t hinge on bedroom antics – there’s something more concrete and serious about how they relate to one another.

I think we all know we’ll be seeing Carol again. She won’t be dismissed this unceremoniously. I’m guessing she gets herself kidnapped by The Saviors, hastening a confrontation between communities. The incident on the railroad tracks will require a response from Negan and his people, and it’ll be swift and bloody. But hey, maybe they’ll like her cooking.