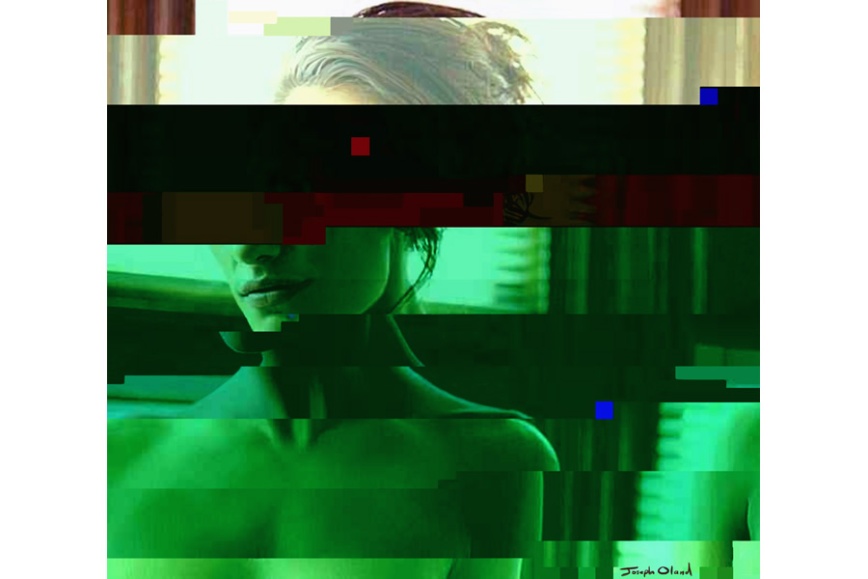 Glitch art. It baffles me that this isn’t something that managed to capture my attention sooner. In a lot of ways, it has, but I didn’t recognize it at the time. The album art from Nine Inch Nails, a decade ago, with the release of the album “With Teeth” represents this artform, I think. But then, in the age of the internet, there’s so much that slips through our fingers. I was recently listening to an interview with Whitney Moore – an obscure media personality and the star of such ‘high-end’ cinema as “Birdemic” (an incredibly low-budget slosh, self-aware and celebratory for it’s obscene garishness) that added fuel. When asked what her favorite art is, Miss Moore answered (reactively, and without a moments hesitation) with a simple, two word remark: Glitch Art.

And Whitney’s no loser. She’s a smart commentator on creative media. She is an insightful voice with a pretty face, and likely not taken seriously because of that pretty face (and her proclivity for making YouTube videos while less-than-sober). Nevertheless, I hadn’t heart the term. And ‘glitch-art’ and ‘data-moshing’ are not the most recognizable terms, at least not in the circles I travel. Naturally, I started sifting through the terminology. Isn’t Google a remarkable resource?

In a technical sense, a glitch is the unexpected result of a malfunction. The term was first recorded in 1962 during the American space program by a gentleman named John Glenn when he described problems they were having. He explained, “Literally, a glitch is a spike or change in voltage in an electric current.”

Data-moshing, which I would suppose is the current way of saying “intentional glitching,” is a relatively new term. We have examples of “circuit bending” in audio recording, and I think that “data-moshing” is the commensurate term (in light of audio-engineers) to image-manipulation. What’s appealing about the practice is that the effects are unpredictable and randomized. The artist is present, but his (or her) intentions are violated by the practice itself. Accidents are acceptable, invited, and celebrated.

There are a variety of ways to “break” encoded visual data. Artists have taken scripted data – text documents of encoded pictures – and fed them into audio engineering programs in order to “listen” to their photographs. The reverse has been done, too. And one of the more popular experiments, it seems, is writing visual data – be they cell-phone pictures, digital photos, Microsoft Paint drawings – into the BitMap file format, opening the file in a text editor, and manipulating or deleting entire lines of code, just to see how these manipulations register when the data is opened back up with an imaging editor (like Photoshop) after being altered in a text-editor (like notebook or Wordpad).

Not all of these experiments yield anything worth looking at. Digitally breaking a document is a grab-bag, mixed-blessing practice. But sometimes something interesting happens. And it’s that unpredictable, random, unimagined result that artists like me crave. Being forced into reinterpreting a perfectly normal, easily understood image – it forces an entire aesthetic re-imagining. Most artists pre-visualize – which is to say that they have an idea of what they want, and then create it. But sometimes, I find, it’s valuable to have one’s vision completely savaged. The concept, tone, and nature of a piece can be altered entirely.

Sometimes for the better.

I imagine I will be pouring over code and tinkering with these scripts, over and over, hoping for a new and expressive result. Like I said, it’s a grab-bag. It’s random. But soft, banal imagery is given a second life when they’re broken. And I could spend hours, days, weeks, tinkering with the code to see what happens. Script-sculpting is my new favorite past-time. Won’t you join me?