After today’s release of ‘Suicide Squad,’ the internet will likely be replete with comparisons between the DC Cinematic Universe’s newest incarnation of the evil clown with the many iterations that came before.

A posthumous Oscar for Heath Ledger’s portrayal in Christopher Nolan’s ‘Dark Knight Trilogy’ makes the role especially risky for the newest actor, Jared Leto. Fortunately, comic book properties have proved malleable, both on the printed page and, as an extension, into the cinematic realm. By design, successful comic book characters change with the times, in both costume and ethos. From the psychopathic serial killer in the comics of the 1950s to the innocent whimsy of Cesar Romero in the 1966 ‘Batman’ television series, to the anarchic and chaos-driven Joker portrayed by Heath Ledger in the ‘Dark Knight Trilogy,’ Leto’s interpretation of the character isn’t outside of comic book canon, infinitely more aligned with the graphic novels of the late 1980s (and the Batman Animated Series of the 1990s).

The anarchic Joker of the Nolanverse doesn’t have the time or patience to sit for ten hours to have himself tattooed and decorated in the way this new Joker has; he invents convoluted plans to rob banks and execute his enemies (and his accomplices), but is ultimately ruled by chaos. The whimsical Joker of the 1966 Batman series was too in love with gold and jewels and heists to visit any real harm upon another human soul. The Joker of ‘Suicide Squad’ is a crime boss, a violent gangster, an archetypal malcontent. His tattoos and chromed teeth are intentional objects of intimidation; he’s controlled, intelligent, calculating and capable.

This is rich territory. And even with the shortcomings of ‘Suicide Squad,’ this is a rich character, a character well deserving of more exploration. Maybe the writers, directors, executives, and other underlings of the DC Cinematic Universe will find a way to not fuck that one up.

For all of the wailing about Batman V Superman, that movie is still a freight train that is on it’s way to hitting the one billion dollar mark. Sure, it was an expensive production and it has proved to be less profitable than Warner Brothers had hoped, but the movie’s still a success. The most vehement critics point to a longer-than-necessary run-time (clocking in at two and a half hours) and a darker-than-necessary tone. These are legitimate criticisms – Superman is supposed to be fun, and this film seemed overly-focused on dragging the Man Of Steel into ‘brooding Batman’ territory, and it simply didn’t work. The film is largely humorless, lacking the kind of heart that audiences had obviously hoped for.

The DC Cinematic Universe is not as well-oiled as Marvel, but the studio still has plenty of opportunity to course correct. The only concern is the very real possibility that they over-correct. For instance, a well-sourced rumor has begun to circulate the Warner is now re-shooting certain scenes from the upcoming Suicide Squad feature to make it more ‘light’ and ‘funny.’ These kinds of last-minutes changes do not augur well for the franchise. They aren’t ‘inspired’ changes. They’re ‘fearful’ changes. Hopefully this won’t spell disaster for what looks to be a pretty exciting ride.

The newest trailer dropped yesterday, and it’s fun as hell. Check it out HERE. 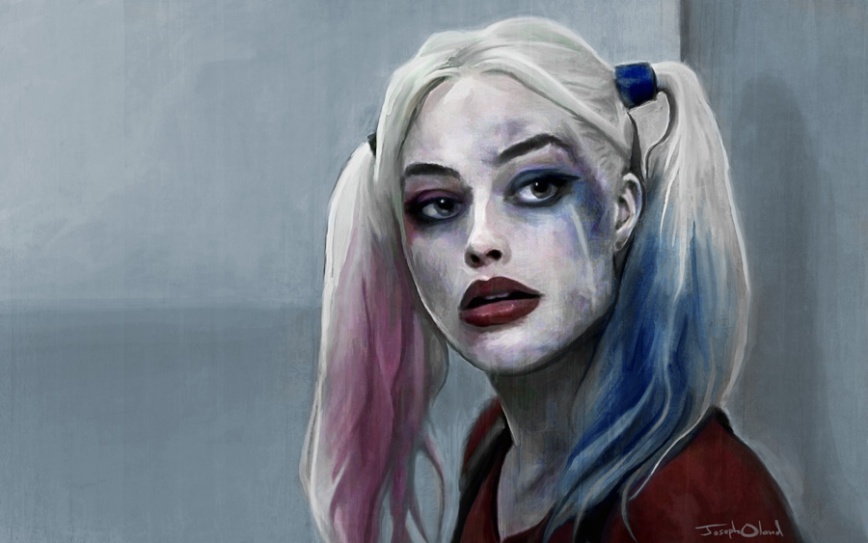 Any comic book aficionado or perennial nerd – every video-game, graphic-novel, pop-culture freak – can tell you what they think about this character and why. Most of us can tell you which version of the character we were first introduced to, and which iteration we prefer, from the after school cartoon to the decidedly more gritty and demented video game character from the award-winning “Arkham” series of Batman video games.

The more recent comic book and video game depictions of the character aren’t just grittier, but also much more sexualized, and this appears to have informed the direction of the character for the new “Suicide Squad” film. This makes sense for a film targeting a teenage and adult male audience. The character is perfectly tailored to play the seductive role while maintaining her dignity; complete insanity can be fun that way. What’s interesting and attractive about the character goes beyond sex appeal, though, which is probably one of the main reasons why so many people are interested in her. She isn’t a two-dimensional comic foil in a tight outfit. Or, I should say, she isn’t just a comic foil in a tight outfit. Her character is fully formed, she has agency and motivation, and this elevates her from many of the cinematic adaptations of female super-heroes and super-villains. There aren’t any one-liners to pigeonhole this one.

What we might also consider is that Dr. Harleen Frances Quinzel isn’t a throwback to the 1950s, or any other earlier era of antiquated Americana. Many comic book stories from the early days of Marvel and DC weren’t very kind to women and their portrayal in popular media. This one is very original. Harley Quinn – a pretty ‘on-the-nose’ pun on the word ‘harlequin’ – was created by Paul Dini and Bruce Timm back in 1991. Her first appearance was in an episode of “Batman: The Animated Series” in September of 1992.

The animated series was undeniably for kids, but it adopted a wonderfully dark tone and took it’s subject matter seriously. The show was illustrated in muted tones and was heavily influenced by art-deco design. The stories were also genre-defining, presenting conflicted characters, gothic atmosphere, and emotionally intelligent plots. The production team respected its audience even though most of them were children; this might explain why the series is still considered relevant today. It’s one of those timeless classics that’ll likely extend much further than it’s original run. Heck, it already has.

In the animated series, Harley Quinn isn’t given an origin story. She just appears as an obvious, humorous female sidekick to The Joker, who disregards her extreme admiration and devotion to him. With a thick Jersey accent and an almost innocent, bubbly desire to please the man of her dreams, much of the humor comes from her obliviousness. She scarcely seems to recognize how psychotic the object of her affection is. This worked well in the cartoon format, with a characterization that remained consistent, more or less, throughout the series.

The origin story didn’t appear until the 1994 graphic novel in the “Batman Adventures” series, titled “Mad Love.” We learn that the good Dr. Quinzel began as an ambitious and uniquely brilliant young psychiatrist at Arkham Asylum. Through a drawn-out attempt to psychoanalyze The Joker, she is eventually manipulated by the madman into setting him free. It’s a Stockholm-Syndrome-esque turn-of-events, and the doctor is subsequently twisted into one of The Joker’s puppets. The narrative is under-girded by Harley’s intellectual gifts and her emotional frailty, conflicting characteristics that make her a fascinating victim  – she’s both dangerous and vulnerable. The story was widely praised and won the Eisner and Harvey Awards for Best Single Issue Comic of the Year.

From the look of things, this origin story will not be a part of the new “Suicide Squad” film. The origin story may be hinted at, but it won’t be a focus of the film’s narrative. Not enough is revealed by the movie trailers alone to cast judgement, but commentators and fans appear to be split regarding this new incarnation of Harley Quinn. Some say the look is perfect, others wish there would be a more true-to-comic presence. Others are concerned that she doesn’t have that thick Jersey accent that helped define her cartoon countenance (an understandable critique when we watch the trailer and hear the classic ‘joker laugh’ from actor Jared Leto, a clear homage to Mark Hamill’s voice acting in the animated series).

The only way to know if the new Harley is worth a damn, of course, is to buy the ticket, take the ride, and see if works. I, for one, am optimistic that this is going to be a fun ride.

David Ayer’s ‘Suicide Squad’ is continuing along a new approach to film marketing that, if not outright established by ‘Star Wars: The Force Awakens,’ has been deeply influenced by it. This new style has become the gold standard for comic book and science fiction movie properties. Comic conventions, cos-players, and self-proclaimed ‘nerdists’ across the spectrum have helped transform film culture. Trailers, in and of themselves, have become event-worthy features.

Disney’s recent acquisition of the Star Wars property has proved successful, but this has been no huge surprise to industry insiders or franchise fans. It was a $4 billion purchase, but it’s recovering those costs faster than expected. ‘The Force Awakens’ has broken box office records across almost every category, although it’s appeal in foreign markets still appears to fall short of James Cameron’s ‘Avatar.’ Needless to say, nostalgia is one hell of a drug, and movie studios have taken note.

Film trailers are transforming how we look at films. They are driving internet traffic, spawning discussion boards and fan theories, and sculpting the final cut. Release dates are set not just for the picture itself, but for the trailer. Bootlegs of these trailers escape from Comic Conventions and quickly leak onto the inter-webs for everybody’s enjoyment. It has even been speculated that trailers are being intentionally leaked so as to curtail low-resolution bootlegs that simply won’t look as good. When a bootleg of the ‘Superman Vs Batman’ film was leaked last spring, Warner Brothers was essentially forced into prematurely releasing a better quality version.

To reiterate: fans are so persistent that studios are possibly leaking their own content. That is a remarkable thing.

Now, a movie trailer has commanded a half hour of television. In an extension of what has been accomplished with programs like Chris Hardwick’s “Talking Dead,” television specials are being used to market films.The Dawn of the Justice League on The CW, which aired Tuesday evening, was nothing more than a back-door pilot for ‘The Suicide Squad’ trailer. They devoted a half hour of network screen-time to debut a movie trailer.

As of this writing, the ‘Suicide Squad’ trailer has racked up 22.5 million views. These are the numbers just from the official Warner Brothers YouTube channel – several other channels have released copies of the trailer as well, all with high view rates. That is a significant number for a two minute video released only two days ago. The movie is still being made – it’s still in post-production. The final edit has not been settled upon. Audiences have seven more months before their appetites will be satiated.

Welcome to the modern film hype.

If there’s anything we all already know, this movie will cement Margot Robbi as the next hot thing in Hollywood. The CW gave a half hour of network time to a movie trailer. The movie trailer gave all of it’s energy to Margot Robbie (Harley Quinn). Fan-boys the world over have set their laser sights on the pig-tailed anti-hero, and they don’t even have to suffer through that 1950s-era Jersey accent from the Batman Animated Series.

The DC Cinematic Universe has struggled to match Marvel’s success, but the tide may be turning. Only time will tell.