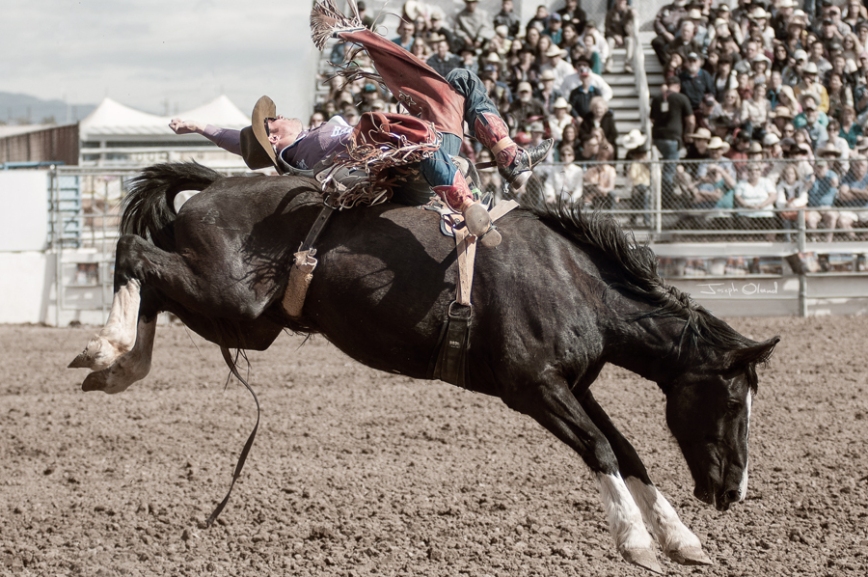 Mason Clements didn’t earn Sunday’s highest score, but his aggregate put him in the number one slot for this year’s Tucson Rodeo.

I missed last years’ rodeo. Instead, I spent the time in Kansas with my family. It’s the first rodeo I’ve missed since 2011, and I certainly don’t intend to miss any future events. I’m not a huge advocate, really, but I do find the experience interesting. I put on what a close friend once called “Joe’s Rodeo Drag,” meaning my denim and cowboy hat, and I spend the week with people that I otherwise likely wouldn’t be around.

It’s challenging to photograph, and the people who participate are hard-working, genuine people – even if we are ideologically different. This is red-state territory, and I’m pretty much a blue-state kind of guy. But I appreciate all of the stories, conversations, and casual interactions with the staff, athletes, and volunteers.

It was an exciting year at the Tucson Rodeo, and I’m thankful to report that there wasn’t a single injury this year, livestock and human competitor alike. A couple of near-misses, and a few rough tumbles, but the crowd was pleased and everybody walked away in good health.

See you next year, Tucson Rodeo. I had no idea how much I missed you until I finally found my way back. 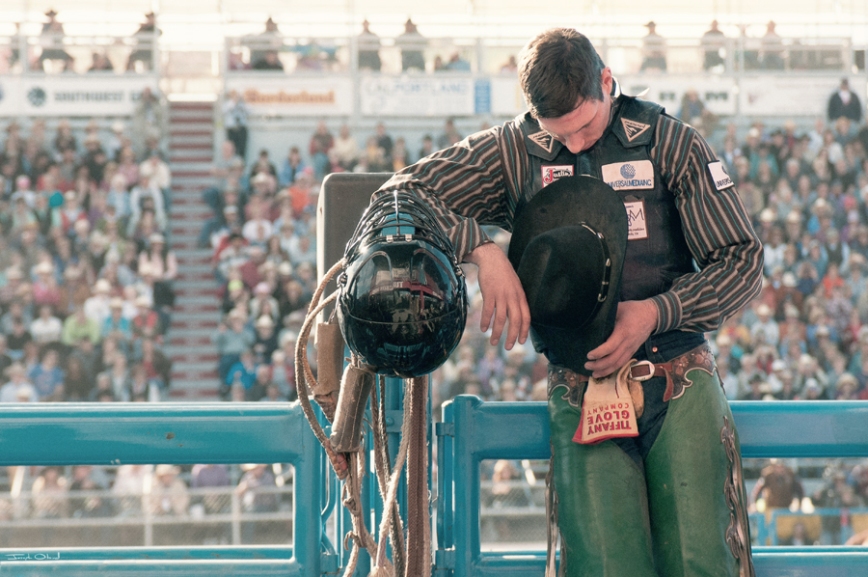 A solemn moment, before the bull-ride.

This is the cowboy that most spectators don’t see. Behind the bucking chutes, before the event begins, there is a clutch of young men taping themselves up, stretching out, and preparing to put their health and safety on the line for prize money, fame, and accolades. It’s a dangerous sport, and it’s common to see these men taking personal moments to say a prayer, focus, psyche themselves up.

Nobody in the grandstands is aware.

It isn’t possible to have a frank discussion about “Jane Got A Gun” without mentioning it’s labored creation. Originally announced in 2012, an avalanche of problems tossed this movie into production purgatory. It’s important to note these troubles because, without mincing words, it absolutely shows in the final cut. I can scarcely recall a film with such a short run time that felt so relentlessly long.

Billed as a western co-starring Natalie Portman, Joel Edgerton, and Michael Fassbender – to be directed by Lynne Ramsey – this esteemed property hit a wall at breakneck speed. In 2013, Fassbender abandoned the project in pursuit of a more ambitious “X-Men” feature. Edgerton was shifted into the vacated role and Jude Law was hired to replace Edgerton. Director Lynne Ramsey then abandoned the project, thrusting the whole production into legal proceedings before Gavin O’Connor stepped in to direct. Director of photography Darius Khondji then left. Then Jude Law left, expressing that he’d only stepped in to work with Lynne Ramsey.

I could go on, but it’s the same game of “musical chairs” that isn’t worthy of further discussion. Slated for an August 2014 release, the date was postponed – twice. It finally landed in the post-holiday wasteland of mid-January 2016. With virtually no marketing, no press screenings, and no hopes of finding a staid audience, it’s a near-miracle it’s even in theaters. No resemblance to an Aerosmith song title could help. This one was dead on arrival.

If we consider these woes, however, we aren’t surprised to learn that “Jane Got A Gun” missed its mark. To its credit, the film isn’t half as bad as one might expect, delivering a couple of well-staged scenes and solid performances  (especially by Natalie Portman). The film plays like a classic Western, and this is where it simply doesn’t work. Rather than attempt to reinvent or deconstruct the genre – as contemporary moviegoers might mildly expect – the narrative is weighed down by poorly developed characters and a staggering snail’s pace, with a series of ham-fisted flashbacks used, poorly, to elucidate the emotional complexity of the characters.

The film is clunky, and where modern audiences might expect dynamism in the characters, we see tired archetypes, caricatures that hop about the stage like marionettes. We can barely bring ourselves to care about their fates. That’s a problem.

Set in 1870s New Mexico Territory, the film opens as retired outlaw Hammond (Noah Emmerich) returns to his remote home where his wife (Portman) is waiting. Riddled with bullets, he collapses from his horse and informs her that “The Bishop Boys are coming.” So-called “mystery box” setups like this are a wonderful device – “who are the Bishop boys?” – that can engage the audience, but in this instance it carries no gravity. We don’t know who he’s speaking of. All we see is that Jane knows who they are, and that they’re definitely bad news.

She dresses his wounds and leaves him to convalesce, delivering their daughter to a neighboring ranch for safety. She then seeks help from from Dan Frost (Edgerton) to help defend herself from the inexorable onslaught.

Through a series of clumsy flashbacks, we learn that Frost was once Jane’s fiance. He left to fight in the Civil War, unaware that she was pregnant. He is eventually declared dead and she she decides to leave their Missouri home, heading west in search of a new life. Believing John Bishop (Ewan McGregor) will help secure safe passage, she is instead sold into sexual slavery and her daughter is murdered by one of Bishop’s underlings. She is rescued by another of Bishop’s cohort, Ham, who steals her away to start a quiet life together.

Enter Dan Frost, who we learn is alive and well, and has tracked Jane across the country only to learn of her new life and her new daughter with another man. Needless to say, he isn’t excited about the prospect of defending Jane and her wounded husband. Naturally, he shows up at the last minute to lend a hand. What the film establishes is that at least four or five years have passed since Ham betrayed his dapper and ruthless employer (his daughter with Jane is our clue), and the film never adequately explains why Bishop is so hell-bent on exacting his revenge. Sure, one of his men quit. Perhaps Bishop took a loss when Jane escaped the brothel – but we don’t even know if the brothel belonged to Bishop or if he simply sold her, in which case he wouldn’t have lost anything. Is it his pride that was wounded? Is there an “honor among theives” theme that’s playing out? We are never satisfied with an answer.

There is a final showdown, but I will spare the details. It plays out largely as we might expect, with a shoe-horned twist at the very end that the cast does its absolute best to play seriously. The bad guys lose, of course, but I won’t tell you what happens with Ham and Frost and their uncomfortable love triangle with Jane.

The stand-alone performances are admittedly good. Edgerton plays a terse and heartbroken rancher as stiff and stoic, nihilistic and whiskey-sipping as we might expect from a heartbroken lonely man. Throughout most of the film he staggers around like a haggard ghost who’s lost its way. Portman does an excellent job breathing life into her character. Half the appeal of the film is seeing her in boots and dress, smudges of dirt on her face, confidently wielding a rifle. I never would have imagined her in a role such as this, but hers is a compelling performance of feminine strength, spitting words through clenched teeth with a convincing mid-western Oklahoma drawl. McGregor is good, too, playing the snake-like villain so expertly I expect some viewers will fail to recognize it’s even him.

The problem isn’t in the performances. It’s mostly the pacing and the flashback structure, which attempts to fill in the background story before the guns-blazing finale. This serves to distract more than inform the film, not necessarily for their content but for how inelegantly these rocks are thrown through the windowpane of the story. The Bishop character is poorly written. He is the most archetypal “Snidely Whiplash” villain one could possibly expect. Perpetually clad in black, swarthy, mustachioed, a cigar clenched between his teeth in every single scene. All that this cartoon character lacked was a moment to twist his mustache and laugh exaggeratedly at just about nothing for just about too darn long.

This film must be filed under “potential for greatness but didn’t get there.” The skeletal structure is there. Not every story needs to be complex in order to be eloquent and compelling. The problem is that the emotional undercurrent isn’t properly expressed; the connective tissue of the plot just isn’t good. Gavin O’Connor brings this story to the screen, but it doesn’t have any personal touch to it, nothing to elevate it to greatness.

I can’t remember rolling my eyes so much at a feature film. It’s a forgettable movie that could have been special but just doesn’t make it. It isn’t worth the price of admission, although it could make for a fun home viewing. At the very least, I’m happy to see films like this and “The Hateful Eight” coming out – the western genre is in need of a revival. We are almost at full saturation with comic book films, and the comic book bubble will eventually burst – mark my words. It looks like the western might just be making a comeback.