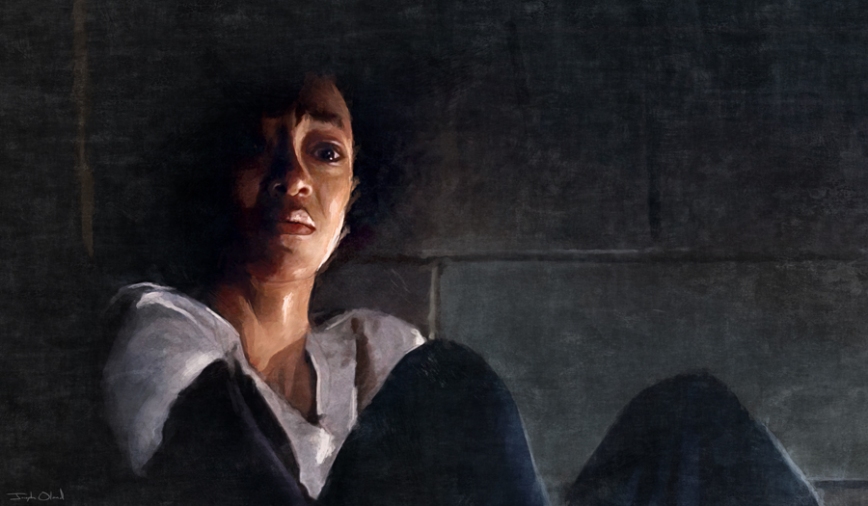 The Walking Dead is all about setting things up, generating tension, and looking forward to future episodes – to a fault. This isn’t more obvious than in the penultimate episode to their seasons. The chess pieces are set up, the dramatic tension is well-established, and the next-to-last episode is intended to leave audiences gripping their armrests and wondering what’s going to happen next. What we’ve learned about The Walking Dead, season after season, is that the “big reveal” probably isn’t going to happen during the season finale; the show-runners and AMC prefer to string audiences along, and the “big reveal” is left for season openers, not season closers. It’s so thoroughly unsatisfying and emotionally manipulative, I cannot believe it. This might be the reason why the show’s ratings have been flagging in a seriously significant way.

It can be exhausting, always waiting for a pay-off that rarely, if ever, arrives.

We already knew that Eugene’s poison pill was going to come back – because…plot – although I suppose few of us could have predicted that Sasha would be foolish enough to rush the gates, lock Rosita out, and run in for a suicide mission against Negan’s army. There will be a reveal, and Sasha will die, but it isn’t likely that the loss is going to affect audiences like the loss of Glenn & Abraham; in that situation (season seven’s opening episode), The Walking Dead really raised a high bar for shocking audiences, and I don’t think they’re going to be able to achieve that ever again.

Something I do find compelling, at least a little bit, is that Rick and his crew of Alexandrians rolled into Oceanside and took all of their weapons, leaving them somewhat defenseless. This paints Rick and his cohort with a brush that isn’t dissimilar to Negan – taking what they need, leaving innocent people vulnerable, and not really giving much of a damn. If the Alexandrians aren’t successful in their mission against The Saviors, there’s still this vulnerable colony, who haven’t actively hurt anyone, left completely exposed.

Descend on innocents, take what doesn’t belong to you because you feel you need it more, and leave. Is that Rick, or is that Negan? Interesting moral conundrum.

Fatigue is setting in for audiences with a show that doesn’t seem to have any end-game. There’s no narrative satisfaction when it feels like a show is doing is best to keep on going, indefinitely. Audiences want a beginning, a middle, and an end. This isn’t an open-world massive multi-player online game. This is a story. And with no end in sight, we’re getting fed-up, and the proof is in the ratings.

Negan won’t die next week. Sasha will. The conflict with the saviors will, at the very least, be drawn out over the entire next season. The Walking Dead is starting to feel like Dexter. Remember Dexter? It was a hot property for a good long while, until FX kept stringing audiences along, kept repeating the same tired formula each season, and the once-promising show is barely even memorable after it’s miserable and ham-fisted conclusion.

I hope I’m wrong, but I think history is repeating itself.

READ LAST WEEK’S REVIEW
– – –
SIGN UP FOR THE LENSEBENDER NEWSLETTER