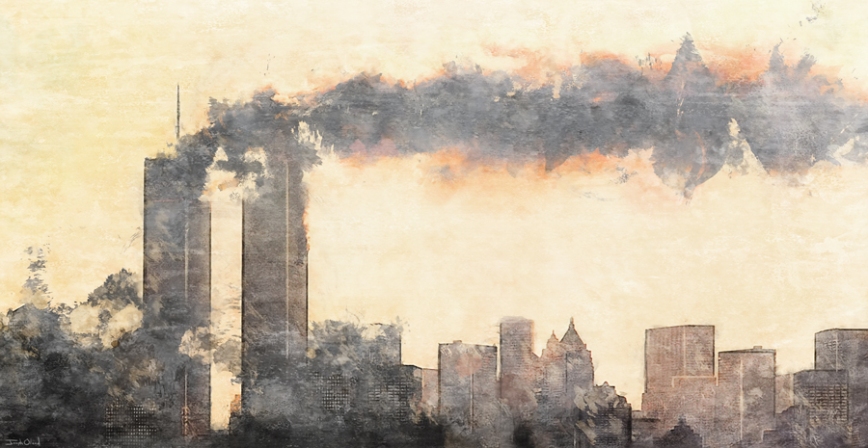 – – –
MERCHANDISE AND ORIGINAL CANVAS AVAILABLE HERE
– – –
I woke up in a messy dorm room. My assigned roommate was a sheepish and sad lad from California who seemed to struggle with the new life that was thrust upon him; a kind and gentle young man, he was polite and terrified with the prospect of learning how to operate a washing machine. He told me about his horse, Sundance, and the life he had lived before being stuck in a dorm room with the likes of me.

Everybody adapts to life away from home differently, I guess.

It didn’t really matter on the morning of September 11, 2001. I was eighteen and I’d had been away from the home for less than a month, just like most of the other folks in the dorm. Unlike most of my dorm mates, I’d made the foolish decision to take early classes; everybody else liked the idea of being able to sleep-in until ten or eleven and built their schedules accordingly. There aren’t many people walking about campus at seven o’clock in the morning, but those that were about were carrying their heads between their shoulders. I found myself standing by a coffee cart outside of the student union, huddled with a few other people, listening to the radio, to the play-by-play of what was happening in New York. Only one tower had been hit at that time.

It was hard to conjugate Spanish verbs that morning.
My second class, calculus, had some students weeping over their pop quiz papers.

Young girls at the dorm that night, blonde teenagers with tight shorts that read ‘juicy’ or ‘U of A’ across the ass, were shouting among themselves that “we need to bomb them,” even though we hadn’t yet identified who “they” even were at that point. And while these groups of young ladies were talking retribution, all the young men in the dorm were quiet. We had all just signed our military draft paperwork in the previous months, right before applying for federal student aid. The gravity of the situation was a little different for the lads than it was for the ladies.

My buddy Newman, a Jewish kid from Manhattan with the palest skin and the largest red curly afro you’d ever seen, wasn’t wearing his usual smile. He was the guy who’d dig through that ridiculous mound of hair at a house gathering and pull out a joint to share with everybody. He’d never worked a square job in his life and he was always the life of the party. We sat with him in his room for hours, nibbling on stale pizza even though we weren’t that hungry, not really able to take our eyes off of the repeated footage on the television. The whole time, Newman tried to get friends and family, anybody from back home, on the phone. Cell towers were down and too many calls were traveling to Manhattan, so he just kept hitting redial, eyes dull and glassy and distant, all day long, staring at the fire on the television screen.

It was a bad day. I was reminded of a school project from fourth or fifth grade, when I was told to ask a family member where they were and what they remembered about the day John F. Kennedy was shot. I had the thought that this was that day for me – that some day in the future, I’d be telling my son or daughter where I was when I learned about the attack on the World Trade Center. My parents were just children when Kennedy was killed, not even ten years old, but they remember. Some things just stay with you, and I know I’ll never forget the feeling, the anchor in my stomach, the sadness that made me want to cry, even though I didn’t, hanging out with my shaken friends.

Not every day can be great, I suppose. Sadly, too many of our days end with images of needless horror funneled into our living rooms. School, concert, movie theater, and church shootings, bombings, assassinations, and gruesome rhetoric from politicians, pundits, and citizens alike. It’s easy to be frustrated, benumbed, and hateful. But these are always opportunities to learn, to grow more resilient, and to come together. The greatest result of the September 11th attack was watching a nation of three-hundred million people, probably for the last time in these past two decades, come together in support of one another, if even only for a few days.

“When we meet real tragedy in life, we can react in two ways – either by losing hope and falling into self-destructive habits, or by using the challenge to find our inner strength.”
~Dalai Lama