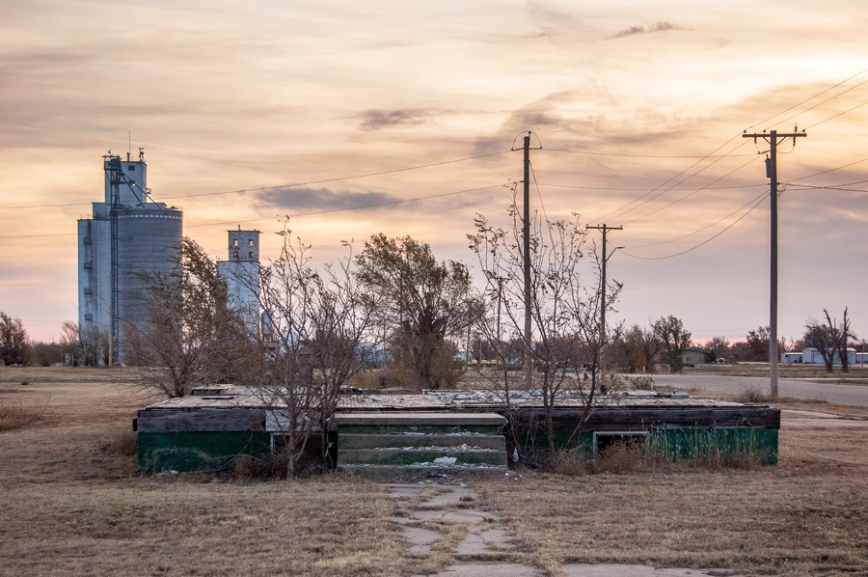 I wouldn’t ever expect most people to have their thumb on the pulse of what happens in small towns in the middle of Kansas, but today’s photograph comes from a little place called Greensburg. In May of 2007 around nine o’clock at night, an EF5 tornado tore through the city center. Estimated at 1.7 miles in width, with winds in excess of 200 mph, it was later confirmed that ninety-five percent of the entire community had been destroyed by the tornado.

The above photograph was taken on November 1st, 2012, more than five years after the devastating storm. A tremendous amount of rebuilding has been done, but there are whole grids of roads that used to be housing subdivisions that are, today, just empty lots with foundations not entirely different from this one.

I drive through this town every time I return to Kansas City from my Arizona home to visit family. I stop at the same gas station every time I pass through.

Greensburg, twelve days after the 2007 tornado.

After the tornado, the Greensburg city council passed a resolution stating that all city buildings would be built to ‘LEED (Leadership in Energy and Environmental Design) Platinum’ standards, making it the first city in the nation to do so. Greensburg has been rebuilding as a “green” town, with just the right name to support the decision. At this point in time, the city’s power is supplied by ten 1.25 MW wind-turbines, which can been seen blanketing the plains outside of town.