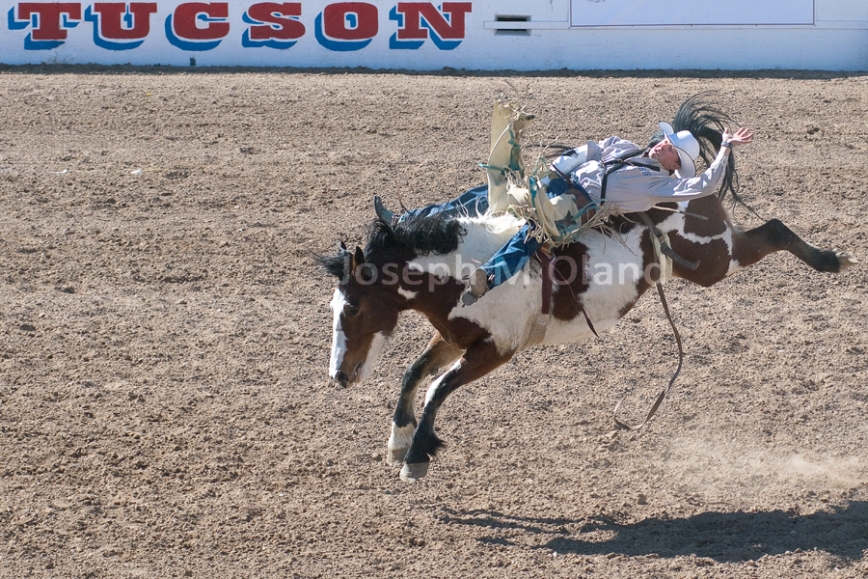 Nine -thousand spectators arrived today, just shy of the arena’s eleven-thousand limit. And you could tell.

Boots rattled the aluminum grandstands and hats flew. Agreeable weather and the promise of pretty cowgirls, whiskey, and an arena full of talented cowboys & expensive livestock conspired to make this one of the better-attended rodeo events I’ve ever been to.

The biggest draw, across the board, is always the bull riding. Most folks agree that the bull-riding roster is populated by madmen. You’d have to be to consider sitting your ass on an seething mound of angry beef ten times your size. It’s my humble opinion that, at the end of the day, it takes an unusual combination of absolute lunacy and skill-tempered bravery to ride one of these monsters. But then, as the danger is ratcheted up – that and the promise of possible injury – it’s hard to un-stick our eyes from the rattling cage before the chute doors swing open. I don’t want to downplay how strictly regulated these events are – but the danger is real. And hell, there’s something about a wind-burned crowd, stomping their feet on the floorboards, huddled beneath the shade of their hats, quietly praying for blood.

Nobody ever enjoys seeing another person severely injured, but they all love to tell a story. I’ve seen enough rodeo injuries in my time, though, and I’m glad we didn’t see any serious ones today. Buck Moon almost got killed riding bull number 604, named Silver Sport, after a no score ride. The bullfighters seemed to have the situation under control, but Silver Sport charged and threw Buck into the gate beside the bucking chutes. He was upright but didn’t do a terrible lot of walking – EMT’s were on the seen to make sure none of his injuries were life-threatening.

Shane Proctor is built like a bar fighter, muscled & lean.  His left forearm is tattooed with a reasonable enough motto: “keep it simple.” This professional, 26-year-old bull rider from Grand Coulee, Washington, took 88 points on an 1,800 pound bull named Coffee Break. Coffee-colored and designed to break men, I imagine Shane feels lucky enough to walk away with today’s top score and no broken bones.

Tom Lewis of Lehi, Utah was the best time today in Steer Wresting by a margin of one whole second, clocking in at 5.6 seconds.

Today was measurably more kind to the ropers. Low winds and a cheering crowd probably didn’t hurt. Cimarron Boardman won the day at 10.4 seconds in the tie-down event. He may well be in the running against the overall tie-down competitor, Cody Owens, whose aggregate score is 43.1 over three rides (that’s an average of 14.4 seconds per ride).

Team roping didn’t change it’s shape this go around – it’s been a tight run for all of the competitors this year. The top three times today were 7.6 seconds, 7.5 seconds, and 7.4 seconds – I suppose it always is more fun when the race is tight, and we definitely got that today. Drew Horner & Buddy Hawkins got to run a victory lap today with their impressive 7.4 second run.

There’s still more to come – three more days’ worth, in fact. If you get the chance, I’d recommend coming out – it’s been one hell of a year.